I hope you are keeping well-hydrated, staying cool, and lugging all your fans and/or AC units up from the basement with relative ease.

But while we relax with a frozen margarita, our legislators need to be hitting the pavement. This sudden summer throws into sharp relief just how soon the end of the legislative session (July 31st) will be upon us.

There’s still a lot to do in the next two months and change. In addition to finalizing the budget, there are a number of enormous bills that have been passed by both chambers that remain held up in conference committees. These include the sports betting bill, a green energy bill, and perhaps most notably the VOTES Act, where same day or Election Day voter registration hangs in suspense.

If you wanted to testify before one of these powerful committees to make your voice heard, you’d be out of luck. Want to merely sit in and observe one of their meetings? Sorry. Well, I’m sure that once they release the final version of the bill you could probably get your hands on a report on the changes they made. Oh wait, you can’t get that either.

The Senate Ways & Means committee released their version of the 2023 budget on Tuesday, totaling $49.68 billion. Their proposal breaks from the House budget by keeping it strictly fiscal; they did not include language banning child marriage or eliminating fees associated with phone calls to incarcerated individuals, both of which were in the House’s version. And while the Senate also omitted Governor Baker’s proposed tax cuts from their budget, Senate President Karen Spilka indicated that she intends to pass tax cut legislation independent of the budget later this summer.

Also known as the “millionaire’s tax,” the Fair Share Amendment is a progressive revenue measure that would tax income over $1 million by an extra 4%. If you make up to or exactly $1,000,000 in a year, first of all, please consider donating to Act on Mass. (I’m kidding! Mostly.) But more importantly, the Fair Share Amendment would not raise your taxes. Even this modest tax on a tiny fraction of Massachusetts households is estimated to generate $1.3 billion per year, which would be used to fund education and transportation. Voters will have a chance to vote on the measure at the ballot box in November.

Act on Mass has proudly signed on as a supporter of the Fair Share campaign. We’re in desperate need of progressive revenue here in Massachusetts; despite the nickname “Taxachusetts,” we’ve actually been cutting taxes more drastically than almost any other state in the country. And during a time when reports are coming out left and right detailing just how underfunded our transit and education systems are, it’s critical that we do everything we can to ensure Fair Share becomes a reality.

There will be no Saturday Scoop next week (5/21) because I will be on vacation. In the meantime, if you have any travel tips for Italy (Rome and Venice, specifically) feel free to send them my way :)

The People’s House Ballot Question Campaign: Collect Signatures Near You!

Exciting news: we’ve revamped our volunteer sign-up system for our ongoing ballot question campaign. You can find shifts in towns near you and sign yourself up through our beautiful event webpage. Sign up for a 2-hour signature collection shift in your area:

FIND A SHIFT NEAR YOU >>

We'll be hitting the doors and talking to voters about how the Fair Share Amendment could transform our communities - from well-resourced and affordable public education to safe roads and bridges and reliable public transportation. Join an event near you to get connected, get trained, and help us spread the word about YES on Fair Share this November! 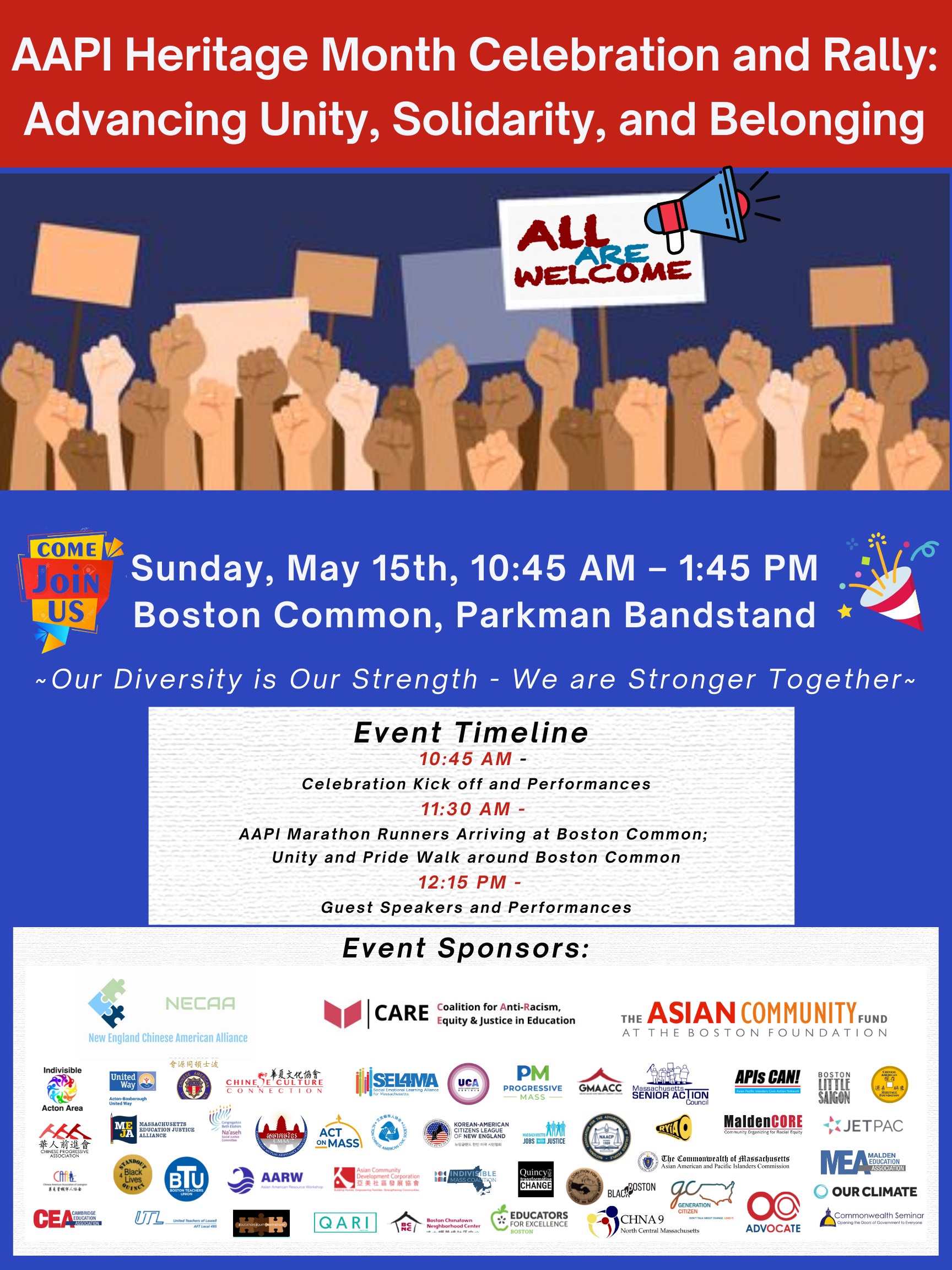 Join the Coalition for Antiracism in Education, or CARE, and supporters in Boston Common tomorrow for a rally celebrating AAPI Heritage Month, and showing solidarity of all ethnic communities across the state in support of anti-racism and equity. This event will feature speakers, performances, and a unity walk around the common.

That's it for today. I'll be back in your inboxes in two weeks, hopefully slightly tanned and full of pasta.