It’s been a while!

While I was snacking on cicchetti and drinking Aperol spritzes, our legislators were busy chipping away at their pile of bills to get through before the end of the session. And I couldn’t have asked for better news to come home to: the five year prison moratorium passed in the House! More on that below.

Also below, be sure to check out our first round of candidate endorsements for State Rep! And then run, don’t walk to their websites to volunteer. We need to do everything we can to elect candidates who are dedicated to their constituents, and will be stalwarts of the movement for state house reform. We only get this opportunity every two years. Let’s use it.

In a major victory for criminal justice reform advocates, House Ways & Means included prison moratorium bill language in the sure-to-pass bond bill which sailed through the House on Thursday 5/19. The language specifies that there can be no construction or expansion of correctional facilities in Massachusetts for five years, stopping plans to build a new $50 million women’s prison if signed into law. The fate of this bill now rests in the hands of the Senate which has less than two months to bring it to a vote.

Governor Baker vetoed the Work and Family Mobility Act on Friday 5/27, one day after it passed both chambers with a veto-proof margin. While the veto is frustrating, it’s far from surprising; Baker had long voiced concerns about undocumented individuals using their driver’s licenses to illegally vote (a notion that the Secretary of State diplomatically called a “red herring” and Senator Chang-Diaz plainly called “fear mongering”). Both chambers plan to override the veto.

What to say? Despite the fact that Massachusetts residents overwhelmingly support implementing single payer healthcare in the state, the State House sent the bill to study this past week, again. The committee’s deadline to vote on the bill had been extended from February (remember “Joint Rule 10 day”) to June–a common tactic used by leadership to bury the news when popular bills get killed by being “sent to study.”

The Senate passed their version of the 2023 budget last week, which now goes to a conference committee where members of the House and Senate will hash out the differences. Only after the conference committee releases the final budget will we know if some of the major policies in the House version, such as banning child marriage and no cost calls for loved ones of incarcerated individuals, will be included in the final version.

We at Act on Mass are absolutely over the moon to announce our first round of endorsements for State Representative. It’s no easy task to find candidates who are down the line progressives, have shown they are dedicated to serving their communities, AND are willing to fight the status quo at the State House. Another thing these candidates all have in common? They can win. They just need our help to do it. 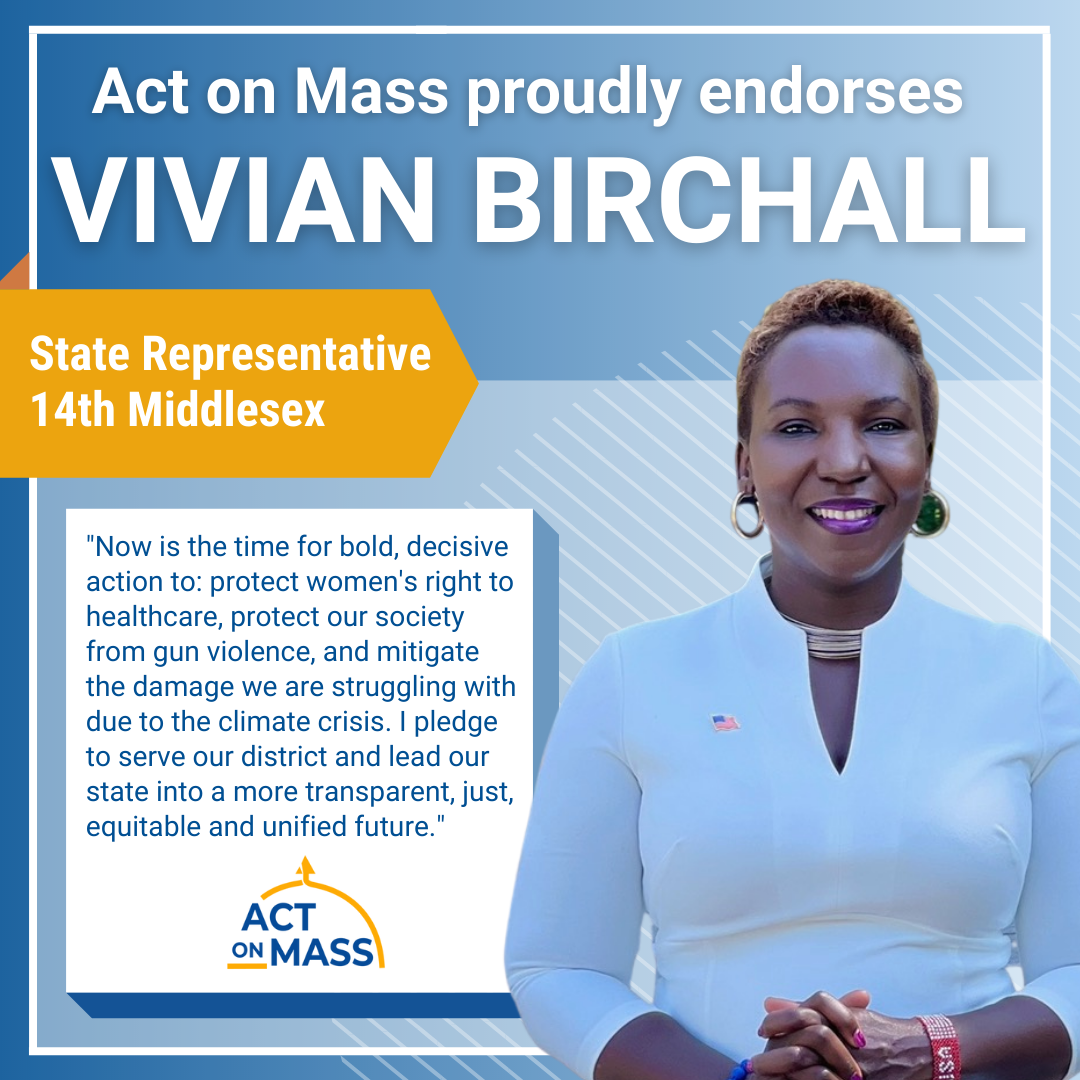 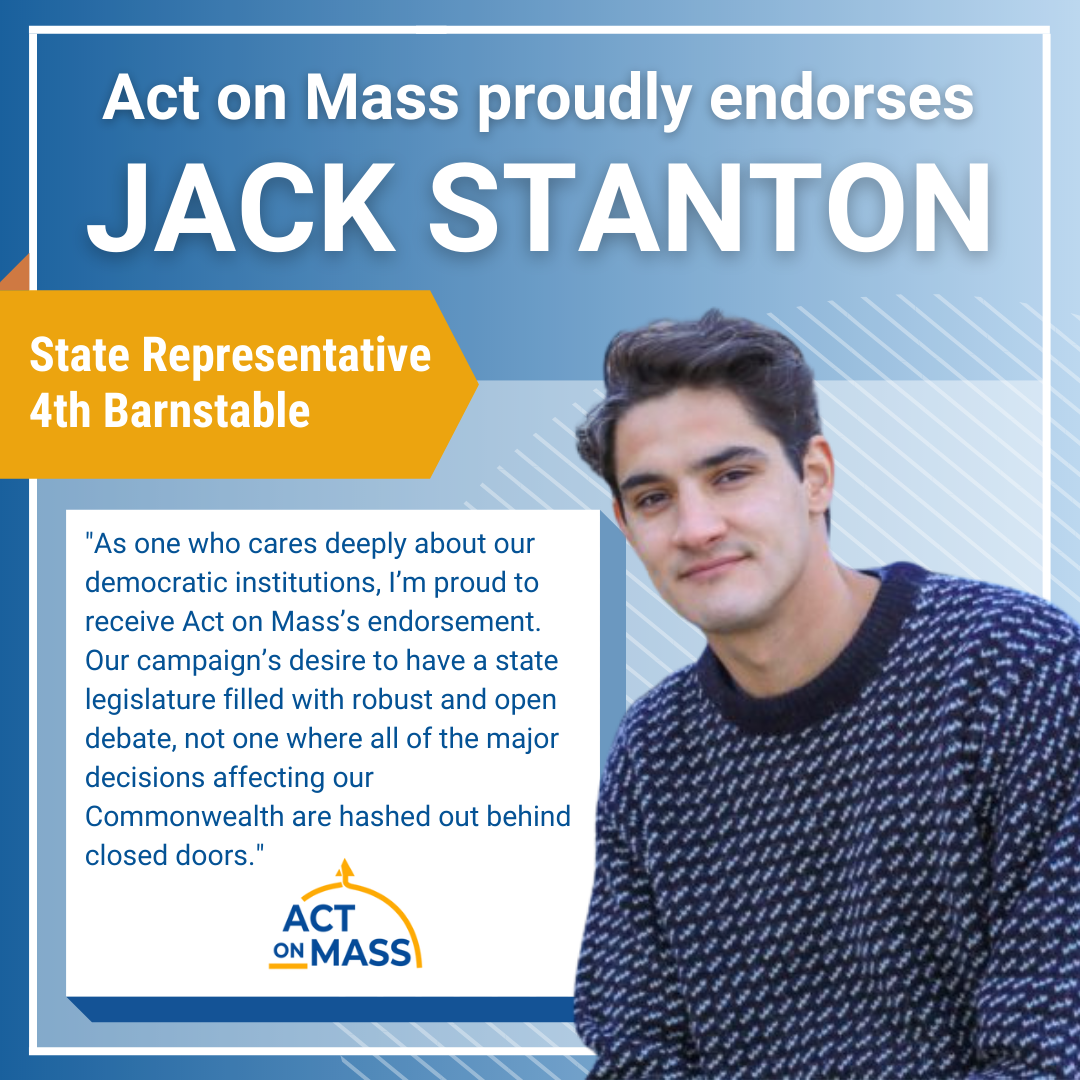 Stay tuned for our subsequent rounds of endorsement later this spring and summer.

Get the Prison Moratorium across the finish line

While it passed the House, prison moratorium language still has to be taken up and passed by the Senate in order to land on the governor’s desk. Here's what you can do right now to ensure that happens:

PHONEBANK OR CANVASS FOR #NoNewWomensPrison >>

In light of the tragedy at Robb Elementary in Uvalde, TX, March For Our Lives is demanding action by returning to our roots -- it’s time for another March For Our Lives. Since we last marched for gun violence prevention in 2018, we passed lifesaving legislation in states across the country. It’s time to hit the streets once again.

RSVP FOR THE MARCH >>

That was a hefty Scoop! If I didn't know any better, I'd say it was shaping up to be a busy summer. Relax and soak up the remaining bits of springtime while you still can.