In a week full of big national news, the news coming out of the Massachusetts State House is same old, same old: legislators still don’t have a plan for the economic development bill that got shelved right before the end of the session, and won’t give us a timeline of what to expect. What is settled are the tax rebates pursuant to 62f (the Reagan-era tax refund law) which are set to go out this fall.

Since the Scoop last week, Massachusetts Budget & Policy Center (our favorite number crunchers) published a report on just how regressive these rebates are--low-income taxpayers can expect back an average rebate of $9. But Massachusetts millionaires will get $22,000 back in their back accounts. One more statistic, and warning, this one stings: 75% of the $3 billion in rebates is going to the top 20% wealthiest Bay Staters.

These rebates are an enormous tax cut for the wealthy, exacerbating our already backwards system where the wealthy count on tax giveaways year after year, and low-income and working class people are faced with stagnant wages, skyrocketing cost of living, and under-funded public services.

There’s no two ways about it—this is huge. On Thursday afternoon, President Biden pardoned all people previously convicted of simple marijuana possession. While there are currently no individuals in federal prison for simple marijuana possession who would be freed by this pardon, it will forgive the convictions of thousands of people, removing barriers to employment, housing, and benefits.

This is a momentous and desperately needed first step to addressing the harm to Black and Brown communities caused by the War on Drugs, but it’s not enough. This does not affect those convicted of selling marijuana, many of whom continue to sit in jails and prisons for something that is now a legal main street business. Neither does this move legalize marijuana federally, nor does it prevent future arrests and convictions for marijuana possession.

The vast majority of people incarcerated for marijuana-related offenses are in state correctional facilities. That means it’s up to governors to pardon them, which gubernatorial candidate Maura Healey promised to do if elected. Biden’s federal pardons, and Healey’s theoretical pardons, would be a welcome addition to Massachusetts’ existing expungement process–a great policy that has been applied far too narrowly.

In the weeks since 48 Venezuelan migrants were trafficked by Florida Governor Ron Desantis to Martha’s Vineyard as a cruel political stunt, folks on the island have come together to supply shelter, food, clothes, and community. Most of these migrants are currently housed on a military base on the Cape while government officials continue to search for a more permanent solution.

This event drew international attention and condemnation. While much has yet to be made public about how the scheme was planned and executed, the New York Times did a revealing deep dive into the mechanics of the scam. Hopefully the sign of an ongoing investigation, the Massachusetts Attorney General and the Department of Justice have been quiet on the topic. The San Antonio sheriff’s office, however, quickly announced their investigation, and numerous lawsuits, including a class action lawsuit on behalf of most of the migrants, have been filed.

With Indigenous Peoples Day right around the corner, let’s take today to focus on the five bills that make up the Massachusetts Indigenous Legislative Agenda:

An Act Establishing Indigenous Peoples Day (H.3191/S.2027) would replace Columbus Day with Indigenous Peoples Day across Massachusetts. By celebrating Christopher Columbus with a holiday, we fail to acknowledge the harm he caused Indigenous peoples, including widespread murder and slavery. Massachusetts (named for the Massachusett people!) should have done this a long time ago. Instead, the bill was advanced favorably out of the first committee, only to die in the Policy and Scheduling committee.

An Act to Protect Native American Heritage (H.3385) would ensure that sacred, funerary, and objects with cultural patrimony could not be sold for profit. This bill got all the way to the end–it was placed on the “Orders of the Day” – the list of bills that the Speaker can choose to bring to the floor for a vote. But Speaker Mariano never did.

An Act Prohibiting the Use of Native American Mascots by Public Schools in the Commonwealth (H.581/S.294) would require all public schools in Massachusetts with a Native American mascot to choose a new, more appropriate one. The racist practice of Native American mascots perpetuates harmful stereotypes, and negatively impacts native and non-native students alike. Eight states across the nation have passed similar bills, but not us: this bill died in the Senate Ways & Means committee.

An Act Relative to Celebrating and Teaching Native American Culture & History (H.651/S.382) would develop a curriculum, in collaboration with tribal nations, that includes Indigenous Peoples education in Massachusetts public schools. This bill was “consolidated” into a bill to increase diversity among educators, but that final bill had none of the Teaching Native American Culture bill’s original language. And that educator diversity bill? Died in Ways & Means.

An Act providing for the creation of a permanent commission relative to the education of American Indian and Alaska Native residents of the Commonwealth (H.582) would create a commission to focus exclusively on improving educational outcomes for Indigenous students, in particular by providing education on their history and culture and preparing them for higher education. This bill suffered the same fate as the one above. 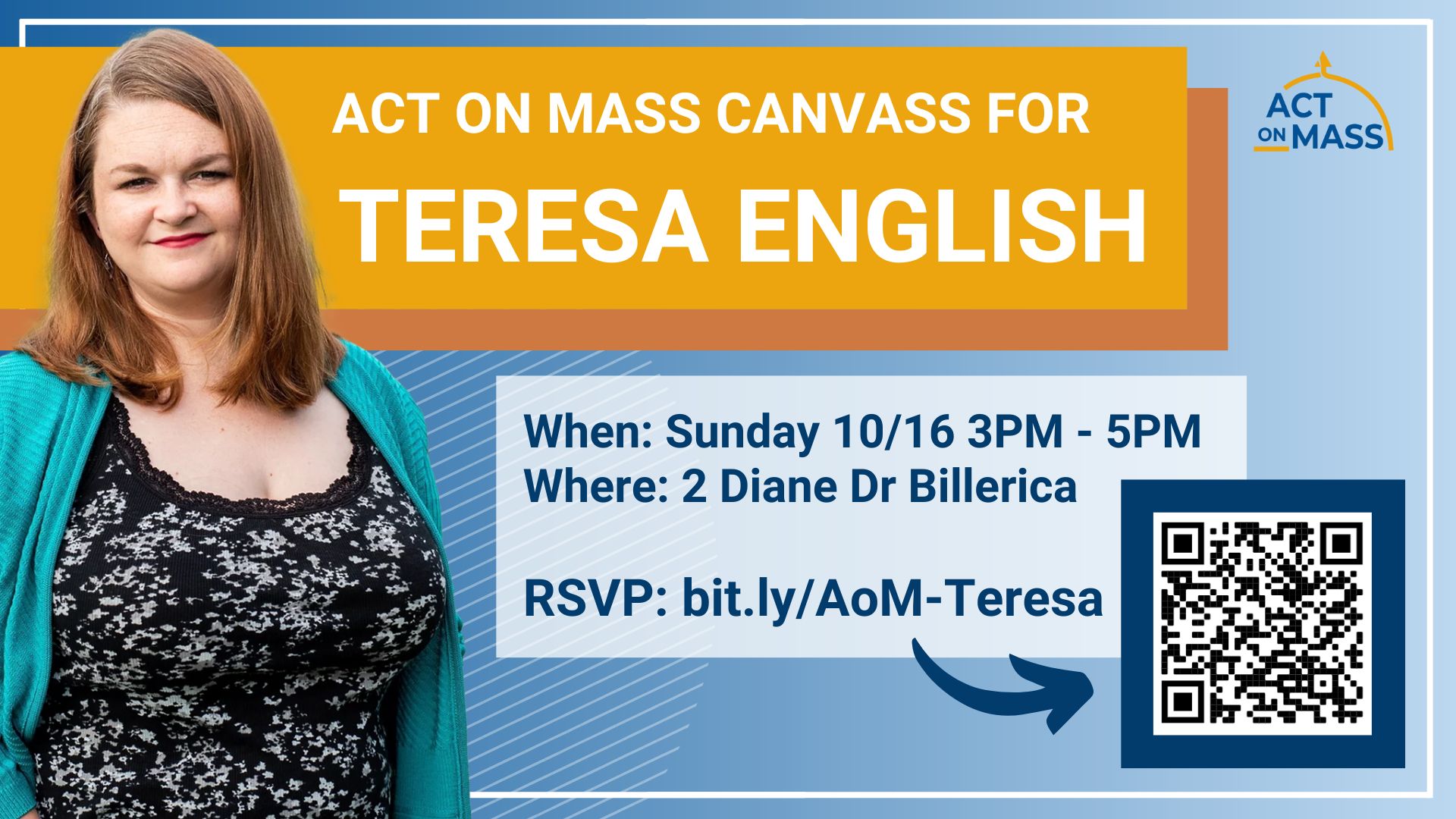 We’ll be knocking on doors in Billerica for State Rep Candidate Teresa English, who is running against one of the furthest right Republicans in the House. Join us on Sunday, October 16th at 3PM in Billerica to canvass for Teresa! 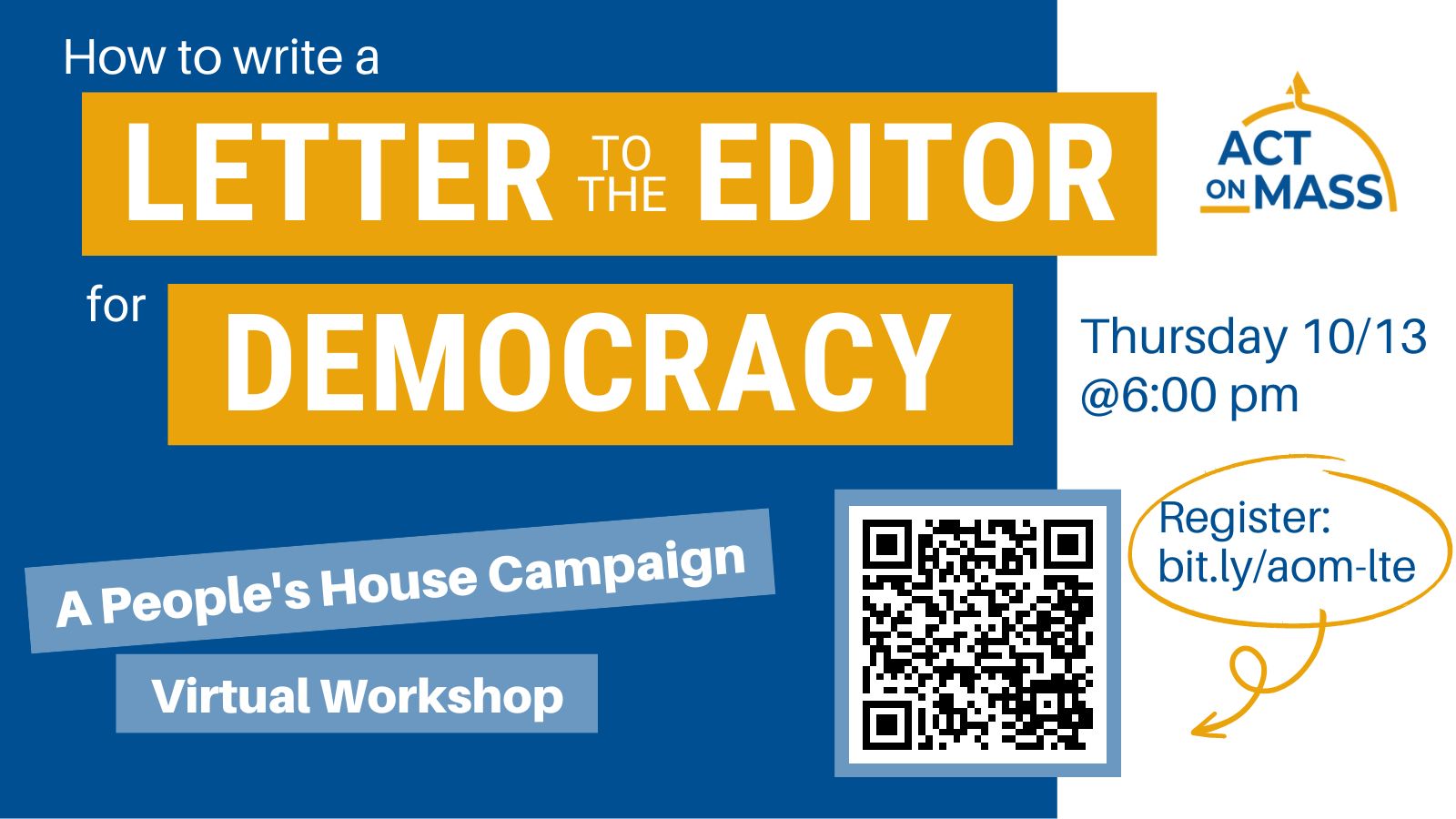 Letter to the Editor Workshop for State House Transparency: Thursday 10/13 at 6:00PM!

As we approach the November 8th general election, it’s time to start making some noise for Yes on 6: our ballot question campaign for public committee votes! Writing an op-ed or a letter to the editor in your local paper is a powerful way to spread the word and let your community (and your representative) know why you support Yes on 6.

Come learn about how to write an effective piece, how to pitch to local outlets, and how to use your personal story to make a compelling argument!

Volunteer for Yes on 4 for Safer Roads!

The recently-passed Work and Family Mobility Act to allow residents without federal status to obtain a driver’s license is vulnerable to being repealed via ballot referendum in November. The Yes on 4 for Safer Roads campaign needs your help to protect immigrants rights and defeat the Republican-backed effort on Election Day. Sign up for a canvass near you

That's all for this week. Enjoy the rest of this crisp fall weekend!