The deadline to register to vote is Saturday 10/29–a week from today. Moving the registration deadline from 20 days before the election to 10 was House leadership’s compromise when they killed Same Day Voter Registration in the VOTES Act. 10 is better than 20, but you know what would be even better? Zero.

Remember to make your plan to vote on or before November 8th, whether you vote by mail, vote early in person, or keep it old school by going to the polls on election day. We all know voting during this midterm is absolutely critical–especially with the referendum questions (Yes on 1, Yes on 4) on the ballot here in Massachusetts.

Moving popular progressive legislation through the state house machinery can take decades, if it happens at all. Ballot referendums are the closest we get to direct democracy–a chance for the people to circumvent the personalities, career incentives, and concentration of power at play on Beacon Hill. It’s an awesome duty and responsibility. Let’s put it to good use.

Teachers in Malden and Haverhill went on strike this past week after failing to come to agreements during negotiations with their respective school committees. As always, educators are having to fight for wage increases, smaller class sizes, and improved working and learning environments at school. After one day of striking, Malden approved their new contract. A particular sticking point was a livable wage for paraprofessionals; starting salary for a para in Malden up to this point could be as low as $20,761/year. Haverhill teachers reached a tentative agreement with their school committee late Thursday night. One of their key sticking points: a stronger commitment to racial justice, including a “trust to recruit teachers from underrepresented communities.”

It’s no stretch to say that communities rely on well-funded, well-staffed, safe and vibrant public schools. When teachers unions negotiate contracts, they are negotiating not just for their own good, but for the good of their students and communities. But teachers strikes are exceptionally rare in Massachusetts. Why? Because they are illegal. In fact, a judge this week ordered an injunction against the Haverhill teachers, forcing them back to work under the penalty of tens of thousands of dollars.

There is a bill to restore public educator’s right to strike. Without so much as a passing glance, the legislature killed the bill by “sending it to study.” If teachers cannot withhold their labor by striking, what chips do they have to bargain for themselves and their communities with?

Earlier this summer, the Baker administration quietly restricted access to Residential Assistance for Families in Transition (RAFT) emergency aid–one of the only safety nets for tenants at risk of eviction and homelessness. Tenants are now required to have received a notice to quit (NTQ) in order to apply for rental assistance. In other words, the landlord must be formally beginning the eviction before the vulnerable tenant is able to seek help. This leads to preventable evictions and makes households increasingly behind in rent, all of which puts them at greater risk of homelessness. A coalition of over 150 housing advocates and community organizations sent a letter to legislative leaders this week calling on them to take action. We, and every Massachusetts resident facing eviction, eagerly await their response.

Commission: tax breaks aren’t worth the loss in revenue

Tax breaks to businesses are always justified the same way: they’ll boost the economy, more than making up for the loss in tax revenue. If reading this is giving you flashbacks to the 1980’s, it’s with good reason: this is the classic Reagan-era “trickle-down economics” argument that has been debunked over and over. Here in Massachusetts, the Tax Expenditure Review Commission has been doing some debunking of its own; this panel of lawmakers and experts reviews the efficacy of tax breaks currently in place, and makes recommendations to the legislature about which to keep and which to scrap. Among the scrap pile: the exemption for the sale of aircrafts from sales tax (estimated to cost the state about $25 million in annual revenue); the 50% tax break on small business stock gains, which affects only 130 taxpayers (and yet costs the state $32-$50 million per year); and the exemption of the sale of certain coins and precious metals from sales tax (which costs $8-$10 million per year). 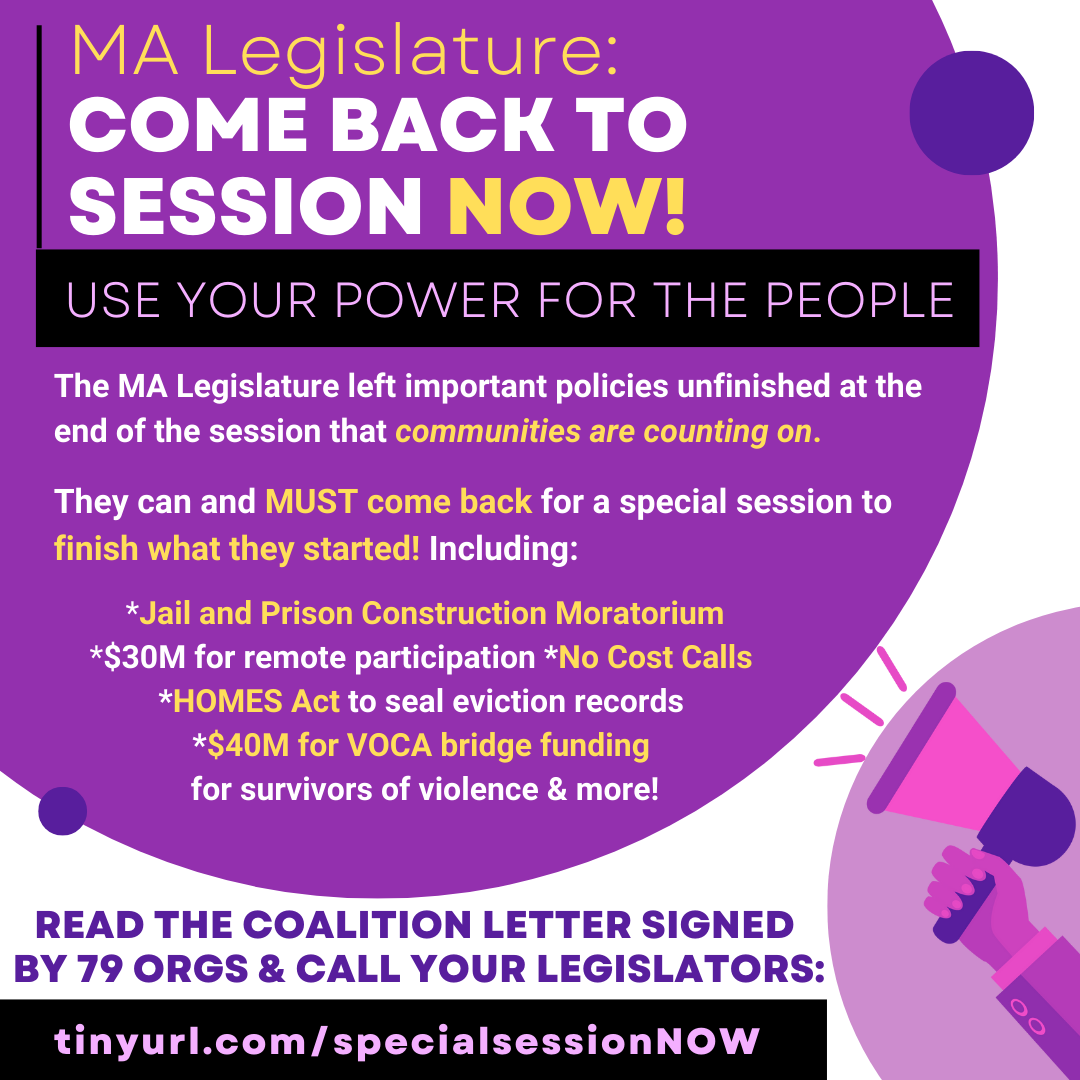 Tell your Legislators: Extend the Session!

Act on Mass is proud to stand in coalition with 78 other progressive organizations calling on the legislature to return for a special session to pass community priorities. Our legislators still have the power to pass the prison and jail construction moratorium, the HOMES Act, funding for hybrid public meetings, no cost calls for incarcerated people, and funding for survivors of violence. They just need to use it.

Join us for a rally on the State House steps in support of extending the session on Wednesday, October 26th at 4:30pm 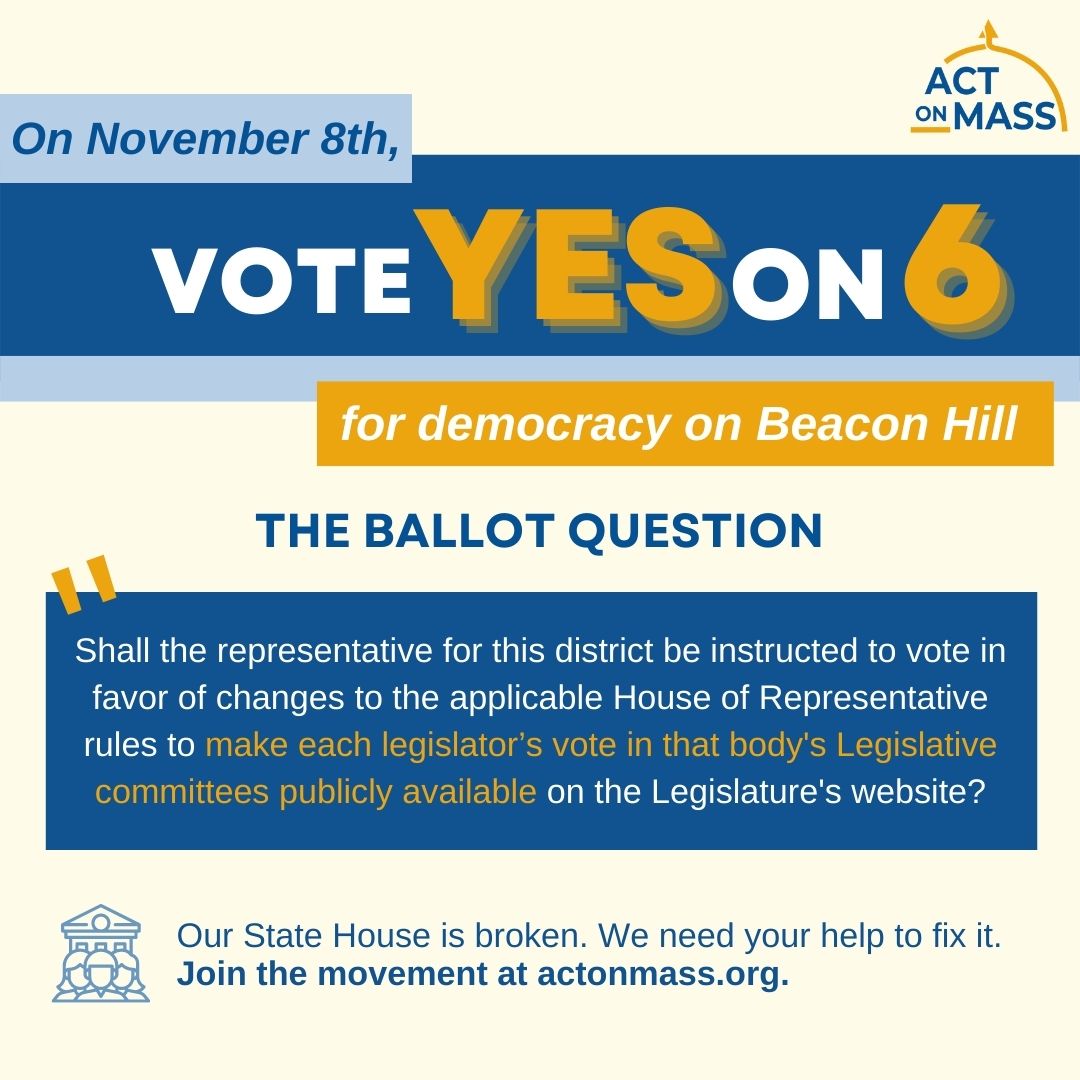 Help us spread the word: Yes on 6!

As we approach the November 8th general election, it’s time to start making some noise for Yes on 6: our ballot question campaign for public committee votes! Unlike the statewide referendum questions, most people aren't aware that question 6 for public committee votes will be on their ballots. Can you send this petition to 5 friends in your area and encourage them to pledge to vote?

Help us spread the word about Yes on 6

That's all for this week.