With six precious weeks until the end of the legislative session, there has been a steady trickle of bills passing the State House. But this trickle will have to turn into a fire hose if our legislators are to pass everything on their to-do list before the end of July.

Of the bills that are still in play, some have been passed by one chamber but not the other (Healthy Youth Act, prescription drug cost oversight, no cost calls), some remain in mysterious conference committees (green energy bill, sports betting) and who knows what might trigger a Baker veto.

As the deadline draws nearer, we must stay vigilant about the quality of bills that make it to the floor and how they’re getting passed. Leadership has a pattern of watering down progressive bills in committee, rushing them to a vote, and using the impending deadline to limit amendments and actual debate; they try to paint open and democratic processes as the enemy of efficiency.

But we know better.

5 year prison moratorium on its way to Baker's desk

The Senate joined the House in passing a bill that would institute a five-year moratorium on prison construction in Massachusetts Thursday afternoon. The moratorium, a priority for criminal justice reform advocates, passed as a part of a larger $5 billion infrastructure bill. This comes at a critical time when incarceration rates in MA have been steadily decreasing while spending has somehow been increasing. In particular, this bill language would stop the construction of the $50 million new women’s prison being planned by the Baker administration. Isn’t it funny how Republicans are all fiscal conservatives until it comes to funding mass incarceration?

Taking up the mantle 7 months after the Senate passed their bill on the same topic, the House unanimously passed a mental health-focused bill this week. The bill seeks to increase access to behavioral health care for young people and would require health insurers to cover an annual mental health assessment, among other provisions. According to House Leadership, the hope is to combine the differing House and Senate bills into a final, more comprehensive mental health bill. Lord knows after 2+ years of Covid, we could use it.

A recently-passed law can be repealed via initiative petition during the same session, but it takes 40,000 signatures to put it on the ballot. A handful of MA Republicans wasted no time after the passage of the Work and Family Mobility Act, which would allow undocumented immigrants to obtain a driver’s license, to file paperwork to repeal it. Whether they will be able to both gather enough signatures by the 9/7 deadline and convince a majority of MA voters to repeal the law is another question entirely.

Finally, some GOOD news from a supreme court decision: the Supreme Judicial Court of Massachusetts struck down a major referendum question poised to be on the ballot this November. The question, backed by millions of dollars from rideshare apps like Uber and Lyft, would have miscategorized their employees as contractors, letting them off the hook for providing benefits and other employee rights. If you were planning on volunteering for the Massachusetts Is Not For Sale counter-campaign and now have some time on your hands, why not volunteer for the Fair Share Campaign instead?

LAST CALL: help democracy & single payer get on the ballot! 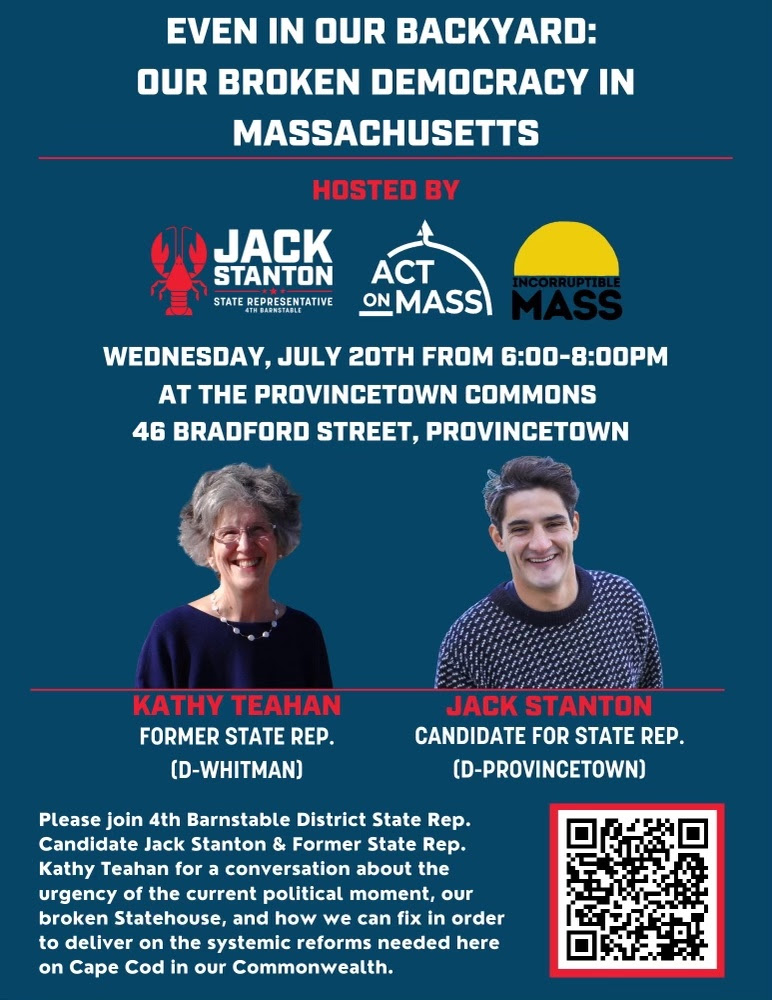 We’re at risk of not getting our non-binding questions on the ballot in a few key districts. We need all hands on deck to cross the 200 signature threshold in these districts: BOSTON AREA >> PITTSFIELD >> ANDOVER >> MARLBOROUGH >>

The Act on Mass and Mass-Care team will be collecting signatures in Pittsfield this weekend! (In fact, this is the first Scoop I’ve ever sent while going 70mph on the Pike.) (Don’t worry, I’m not driving.) Come join us for an hour or two! I would love to meet you in person.

Our friends at MEJA are hosting two important education equity and justice virtual conversations this week:

That’s all for now. Hope to see you at one of our upcoming signature collection shifts!