When was the last time a report commissioned to study an issue in Massachusetts came back with good news? I don’t know, but it certainly wasn’t this week.

Reports of this kind are incredibly useful to describe people’s lived experiences in concrete terms, and plot a pathway for policy solutions. But reports mean nothing if they don’t inspire real, material change. And more often than not, they don't.

Let's get into it.

A pandemic-era moratorium on evictions in Massachusetts ended in October 2020, despite outcry from activists and constituents to extend it. A recent report found that residents of color were far more likely to be evicted after the moratorium lapsed than white residents: 30 evictions were filed per 1,000 renters in non-white neighborhoods, whereas predominantly white neighborhoods saw only 18.5 per 1,000. Other groups most likely to face eviction include Immigrants and single mothers. Children’s Health Watch commented: “we have seen that even up to five years after an eviction, we'll see higher rates of maternal depression, higher rates of children being in fair or poor health, having developmental delays, and even having higher rates of being hospitalized.” Meanwhile, bills to extend the moratorium and end the ban on rent control haven’t even come to a vote in the legislature.

An 2021 independent review of salary practices for the state senate staffers found systemic issues ranging from hiring practices to underpayment. Receiving a salary of $32,000, former senate staffer Maia Raynor explains her struggle to make ends meet during her time in the state house. As of 2018, all pay raises in the senate have to be approved by the Senate President. According to all 14 staffers interviewed for this article (an absolute must-read), this has led to a toxic dynamic where staffers' needs get sidelined. As Raynor explains, “senators who got a meeting with leadership had to choose between asking for more pay [for their staff] or asking for support for their priority bills.”

On Thursday the Senate passed their version of the supplemental spending bill passed by the House earlier this month. Earmarks include $700 for Covid relief, funding for infrastructure repairs, and $10 million towards resettlement of Ukrainian refugees. The Senate’s version splits from the house by including language to divest the state’s pension funds from Russian companies. This and any other differences will likely be ironed out in a conference committee.

The long-awaited Green Line Extension opened its first station on Monday in Somerville’s Union Square. 20 years in the making, the occasion represented renewed investment into and expansion of the state’s transit system. Hopefully the GLX isn’t the only expansion on the horizon; during her speech at the ribbon cutting ceremony, Senator Elizabeth Warren voiced her support for building an East-West rail that would connect Boston, Worcester, and Springfield. Do you feel that, Massachusetts? That’s the Mass Pike shaking in its boots!

The hunger strike launched by local climate activists in protest of a new power plant in Peabody ended this week. The group was successful in generating press, support, and attention from legislators. Read their final statement and learn more on Facebook at #FastingforaFuture.

Join IMC and Act on Mass for a Conversation with Author David Pepper Tuesday 3/29 @ 7:00 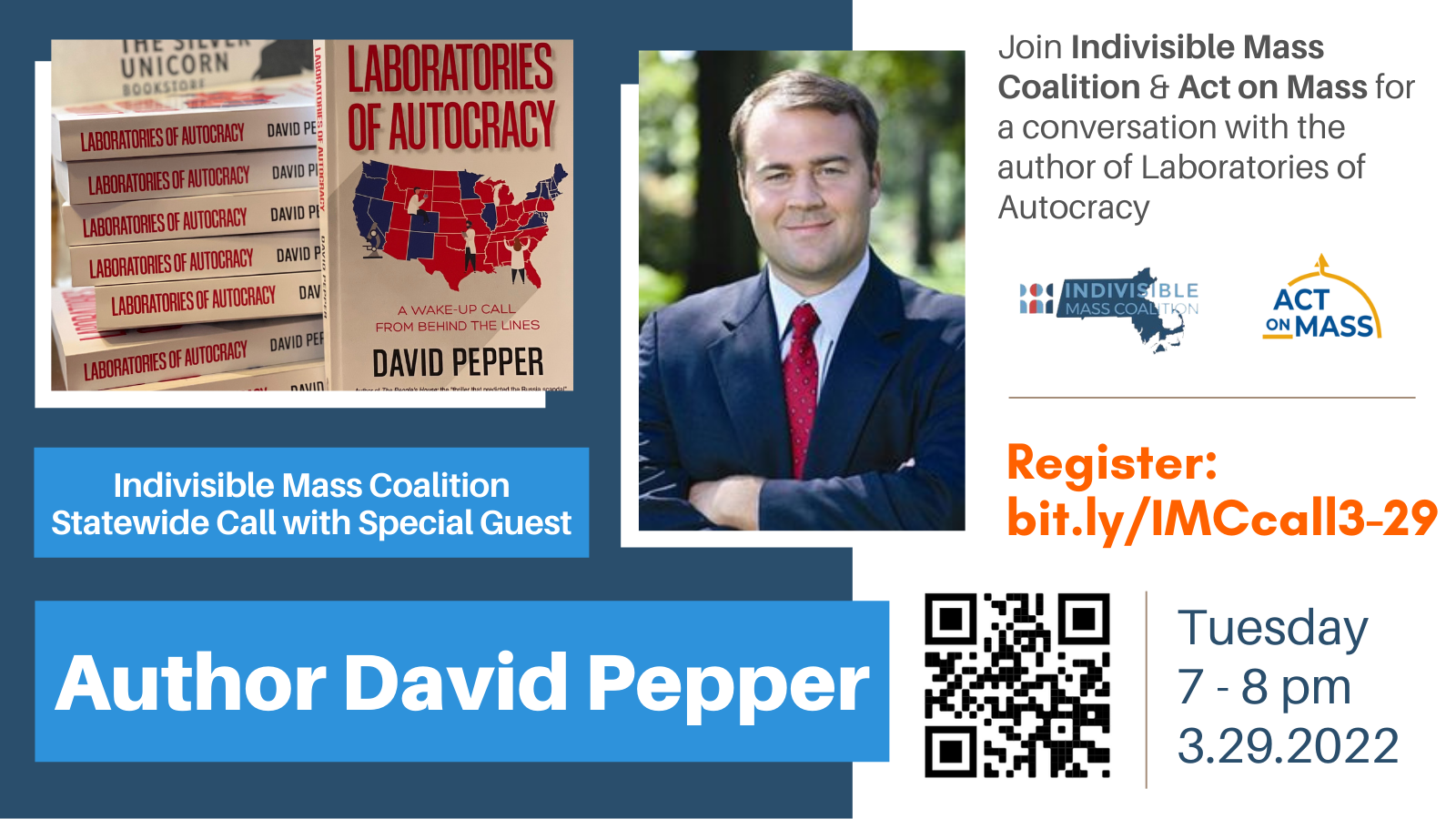 We’re thrilled to be co-hosting Indivisible Mass Coalition’s statewide call with guest speaker David Pepper, the author of Laboratories of Autocracy: A Wake Up Call From Behind the Lines.

Last chance to help us reach our goal: Fund our Ballot Question Campaign!

With April just days away, we’re getting ready to officially launch our non-binding Ballot Question Campaign! Our goal is to get our transparency question on the ballot in as many districts across the commonwealth as possible. Unfortunately we’re still behind our goal of raising $4,800 by the end of March to fully fund out campaign. Can you chip in today to ensure we can run the most widespread and effective campaign possible?

The Massachusetts Legislature is one of the only state houses in the country without an independent legislative research bureau. One such bureau was established in 1954 to assist legislators and staff with research, but was cut in the early 1990s. A different but similar bureau was established in the 1970s, but this, too, was cut in the early 2000’s. Without this critical resource, constituents and rank-and-file legislators are less able to draft high-quality legislation and counter leadership’s top-down corporate-friendly legislative agenda.

That's all for this week!