The two year anniversary of Governor Baker declaring a state of emergency due to Covid-19 came and went during an otherwise slow news week on Beacon Hill.

Covid cases have been steeply declining since the Omicron variant peaked in January, and now are hitting levels last seen in July.

Between low Covid rates and the crocuses blooming in front of my apartment building, it's hard not to feel a little hopeful. Also making me hopeful? The courageous and dedicated activists putting themselves on the line for their communities. More about that below.

But first, let's check in with our slightly less awe-inspiring legislators.

In a unanimous vote, the House passed a redrafted version of Governor Baker’s $1.6 billion supplemental budget bill on Wednesday. Fresh out of House Ways & Means, the redraft includes additional funding for Covid tests and vaccines, infrastructure repair, rental assistance, and $10 million towards resettling Ukrainian refugees. Plus, good news for cautious diners and patio heater industry magnates alike: under this bill, outdoor dining and to-go cocktail service will remain in place until April 1st, 2023.

Well, that was fast

Just a little over a week after reopening to the public, legislative leaders have dropped both the vaccine/proof of negative Covid test requirement and mask requirement for State House visitors.

Six climate activists from 350 Mass’ Climate Courage group are beginning a hunger strike on Tuesday to protest a new oil and gas plant in Peabody. This new plant was approved before recent environmental justice legislation was signed into law, according to Massachusetts Climate Action Network, who estimated that the plant would emit upwards of 51,000 tons of CO2 per year.

Join the strikers and allies at the Fix The Grid Rally on Wednesday 3/16 at 4:30PM across from the State House 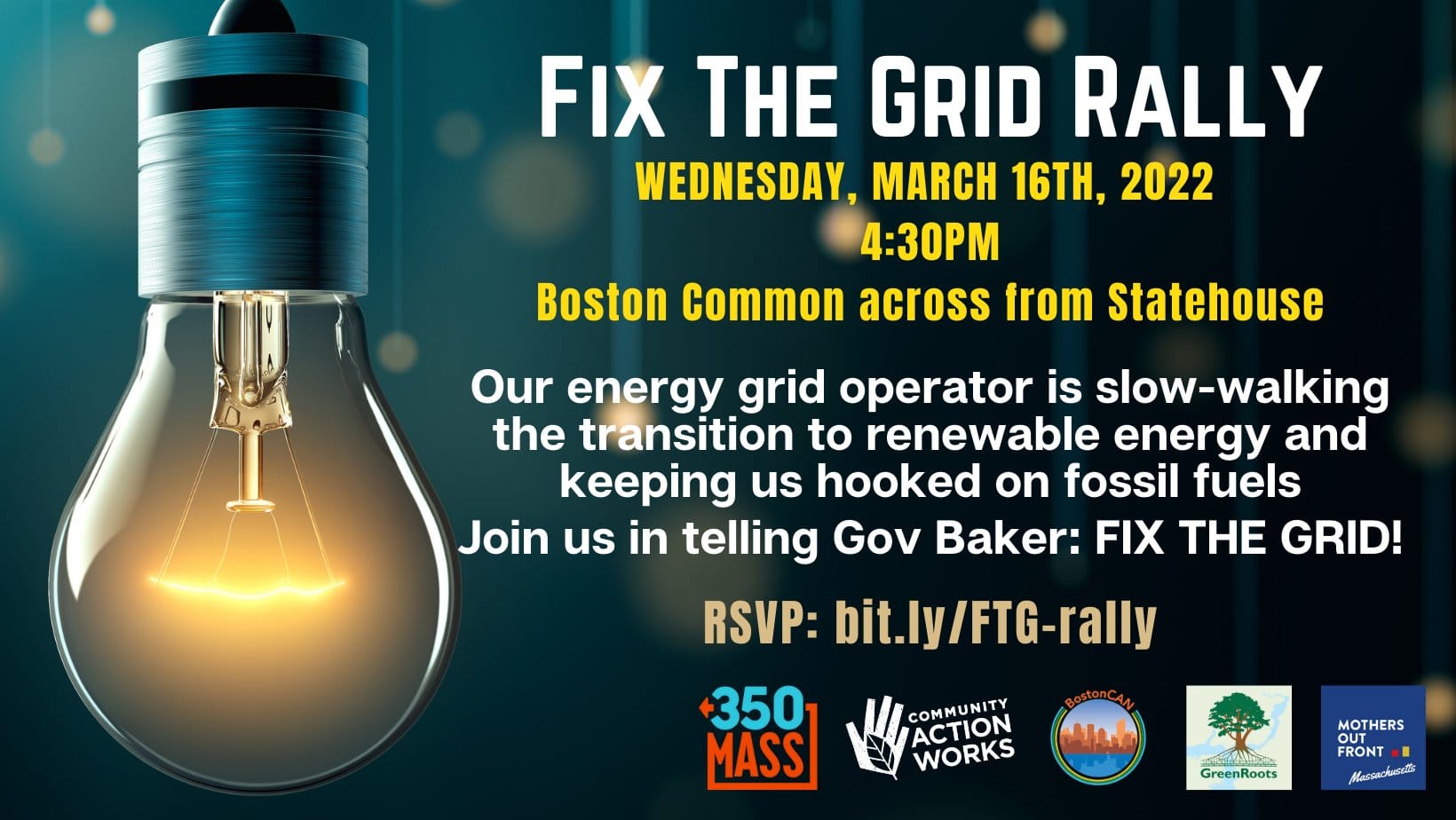 After kicking off in Boston, the hunger strike tour continues with standouts in towns across the state over the next several weeks. See the strike schedule here, and follow them on their Facebook page for updates. Want to join the strike or support their efforts in another way? You can contact the group at climatecourageusa@gmail.com.

RSVP FOR THE RALLY >> 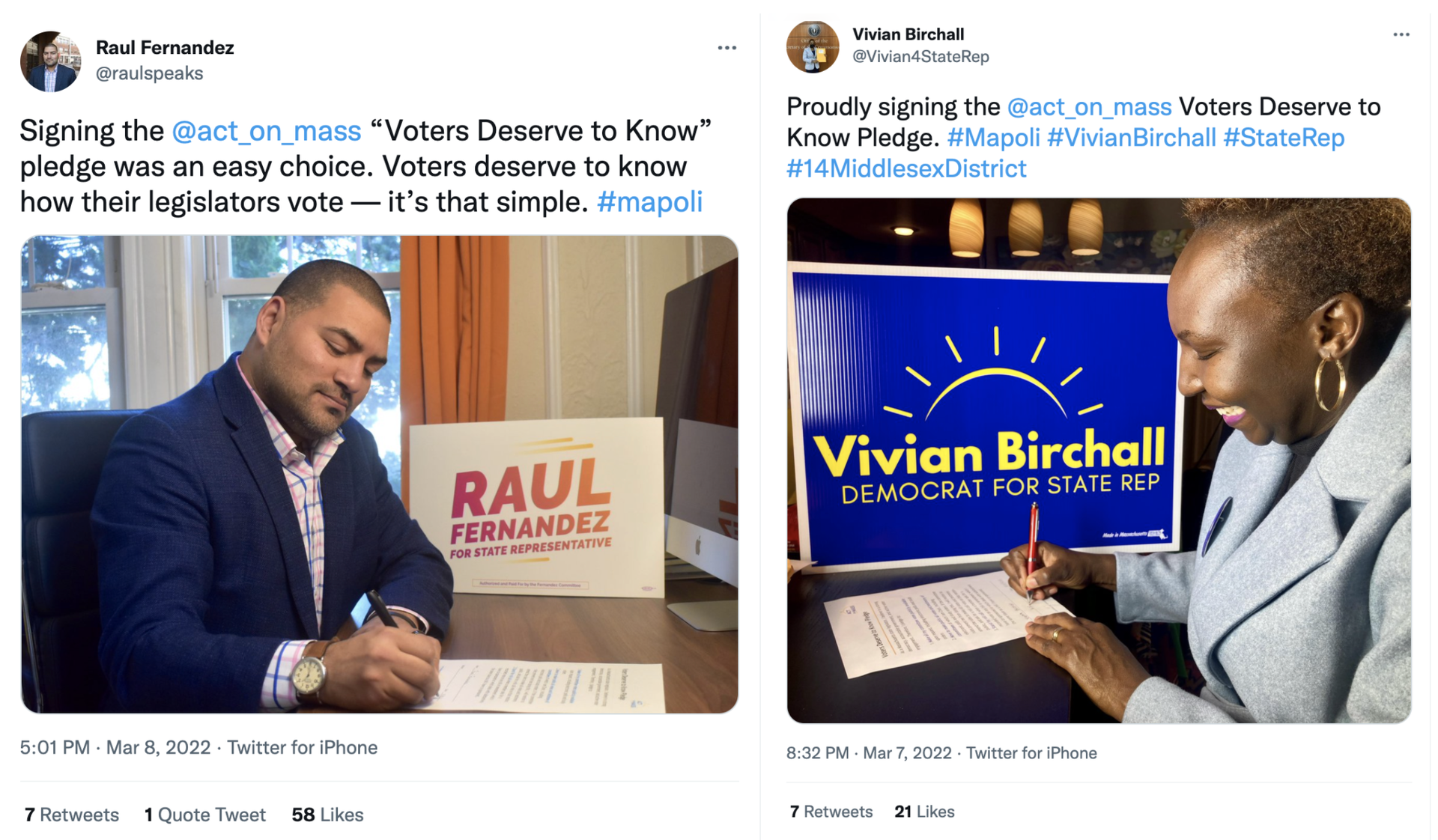 We at Act on Mass are THRILLED to announce the very first Voters Deserve To Know Pledge signers of the 2022 election cycle:

By signing the Pledge, candidates promise to (1) make all their committee votes available to the public, (2) stand for roll call on any legislation they cosponsor, and (3) make committee votes public for any committees they chair.

If you’re a candidate for State Representative or State Senator and want to sign the pledge, contact us to learn how: admin@actonmass.org.

The Speaker of the MA House has the ability to appoint members to a variety of powerful roles, such as leadership positions and committee chairs. As we at Act on Mass note frequently, these positions come with handsome bonuses ranging from $5,000 - $90,000. However, we don’t mention as often as we should that these stipends were recently sharply increased. Before 2017, the stipend for the House Ways and Means chair was $25,000. Currently, this position receives a stipend of $73,851. By increasing the size of the stipends, the Speaker was able (with the rubber stamp from the legislature) to increase the power he and future Speakers wield over the membership.

That’s all for now folks! Only one more day until.. do I even have to say it?