Floor votes are not recorded in the Massachusetts House of Representatives unless 16 reps stand and request it, creating a huge barrier to votes being recorded . And even though we're a blue state with a Democratic supermajority, we have a higher threshold than 40 other states!

(In the chart below, Massachusetts is ranked behind 3 other states who also require 16 Reps in normal circumstances, because state house rules require a set percentage of elected representatives while these other states require a percentage of present representatives. Reps are not always present in session every time a vote is recorded, so in circumstances where several Reps aren't present, there would be fewer reps required to stand for roll call.) 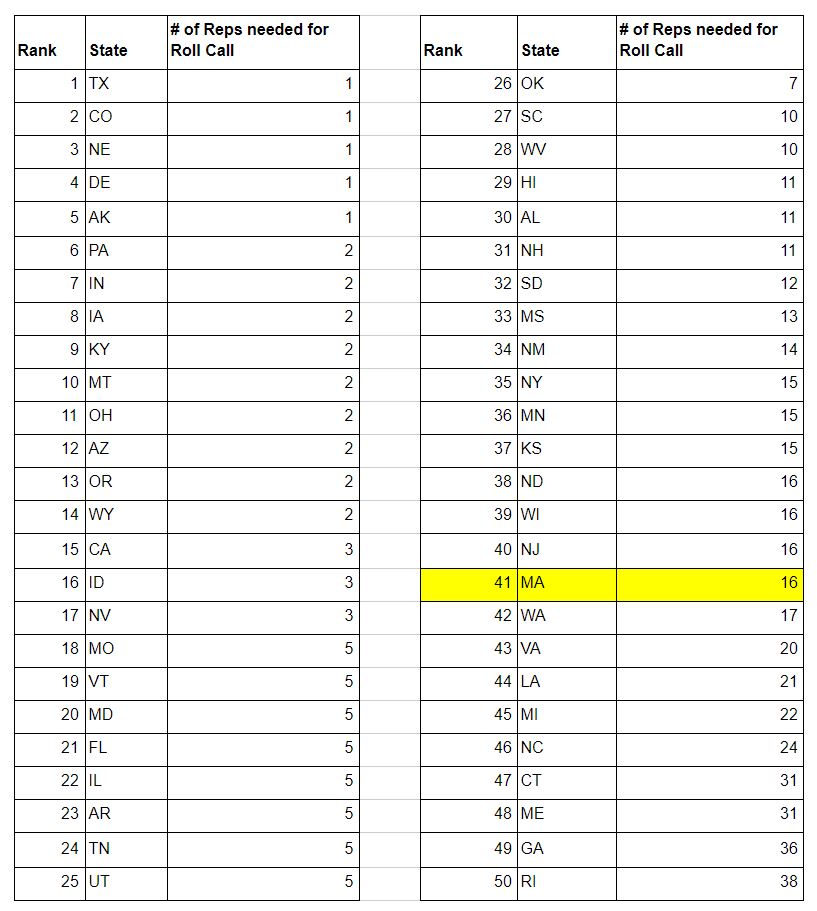 Why does this matter?

Needing 15 of your colleagues to be present in the chamber and stand to support you is an organizing challenge for reps, especially on matters that directly challenge leadership. In most cases the rep will withdraw their amendment without trying to get a roll call vote on it, so we don't know how many amendments would have been debated if the threshold were lower.

We got a rare glimpse of how hard this process can be back in January of 2019, when Rep. Russell Holmes asked for a roll call on an amendment which would have reversed the pay raise for Reps enacted in 2017 and made the salary for all reps equal. When he asked to record this vote, the initial count turned up only 12 reps willing to stand for this, so the chair declared an insufficient number of reps stood and the vote wouldn't be recorded. After some confusion on the floor, someone shouted that there was support, and a court officer can be heard saying "You already counted. Insufficient. Do you want to give it to him?" The chair relented and announced that they would record the vote.

A functioning democracy requires that we know how our reps are voting on issues that affect us. It's unclear if reps simply didn't stand fast enough to be counted in this case, or if the chair took pity on Holmes and decided to "give it to him" - but the foundations of our democracy shouldn't depend on the goodwill of the chair, or how fast the State Reps can jump to their feet.

If you've ever watched a session, you'll see that there can be hours of downtime with nothing happening while decisions are being made behind closed doors. Very little public debate actually occurs in the House. Making it easier to record votes would force reps to debate on the record, which is is vital to a healthy democracy.

A number of Reps have already signed up to support this amendment, but we are hearing some arguments against it from various Reps.  Below you'll find the most common arguments Reps have made against this amendment and ways to respond:

1. "This would slow down the process too much and gum up the works."

2. "This just doesn't matter, no one has failed to get a roll call this session who asked for it."

3. "This is only something that Republicans care about."

4. "Some extremist Republicans would be more likely to offer offensive amendments that would attack vulnerable immigrants and other marginalized people. This would help them get these votes recorded."

5. "This is only something Republicans care about because it would help them filibuster Democratic priorities."

6. "This doesn't matter because the rules can just be waived."

8. "You know I'm on your side. This stuff is just complicated, so you have to trust me."

Want to know who's committed to vote in favor of Amendment #3 so far? You can learn more at www.ActOnMass.org/the-campaign .