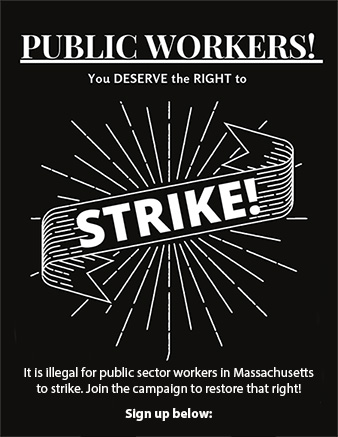 End the Prohibition on Strikes for Public Sector Workers

For over 100 years, the Commonwealth of Massachusetts has considered strikes by public sector workers an unlawful activity. Section 9A of Massachusetts General Law prohibits public employees from striking.

The right to strike is a basic human right that has become customary in international law and has been repeatedly affirmed by the International Labor Organization (ILO) and numerous human rights organizations. The right to strike is a right enjoyed by public employees in a number of other states in the U.S., as well as many other countries around the world. It is time to end this archaic prohibition.

The Right to Strike campaign has a clear objective: to remove Section 9A from Massachusetts General Law by passing H.1946, An Act Protecting the Right to Strike. As part of the Commonwealth’s supplemental budget process in the fall of 2021, state representatives will file amendments to the budget. Those amendments will range in substance from earmarks for local parks to complete pieces of legislation, such as the bill removing the ban on public sector strikes.