School vacation week is usually a quiet one for the State House, and this week was no exception; with no formal sessions, official business was limited to informal sessions which are used by leadership to pass largely procedural and local bills.

While our students, teachers, and legislators took a break this week (some more earned than others), our governor took center stage. Motivated by a tax revenue surplus, Baker is pushing big tax breaks and supplemental spending. Tax cuts aren’t necessarily good or bad – it’s about making sure that the right people are getting tax relief, and that we’re investing our precious taxpayer dollars in the way that will be most transformative. Spoiler alert: we’re not.

The debate over the budget will continue through the spring, where it will climax in "budget season" -- the one to two week period in April or May when legislative leaders draft their own budget, sift through thousands of amendments, and decide nearly unilaterally what makes it into the budget and what doesn't. Talk about a process that needs more transparency!

But we’ll cross that bridge when we come to it.

On Tuesday, lawmakers held a hearing to discuss the $700 million tax relief plan central to Governor Baker’s proposed budget. While some of Baker’s sweeping tax cuts would benefit those in the lowest income bracket, the vast majority of tax relief would benefit the very wealthiest Bay Staters. As progressive advocates and Democratic lawmakers noted during the hearing, these are not the people most in need of assistance two years into the pandemic. “What people in my district are talking about is how Wall Street is going through the roof and breaking records,” Senator Adam Hinds noted during the hearing. “And yet our food bank lines are going around the block.”

Remember that these decisions are ultimately up to the legislature. Time will tell which taxpayers they are willing to go to bat for.

$2.4 billion supplemental budget on the way

The governor filed a new spending bill meant to supplement the $101 million Covid relief bill passed just last week. The bill, which the House has already sent to Ways & Means, would spend $1.6 billion more on Covid response efforts. Other major earmarks include funding for childcare, human services, and road repair.

The State House is open: here’s what you need to know

The State House opened its doors to the public for the first time in two years on Tuesday. Visitors are welcome 9 a.m. to 5 p.m., weekdays. Proof of vaccination or a negative Covid test from the previous 24 hours is required to enter the building, and masks must be worn while inside. During its closure, the State House’s HVAC system has been improved, and some spaces have been reorganized to be more conducive to social distancing. However, not everything is back to pre-pandemic normal: the public will still have to attend and testify at committee hearings virtually. 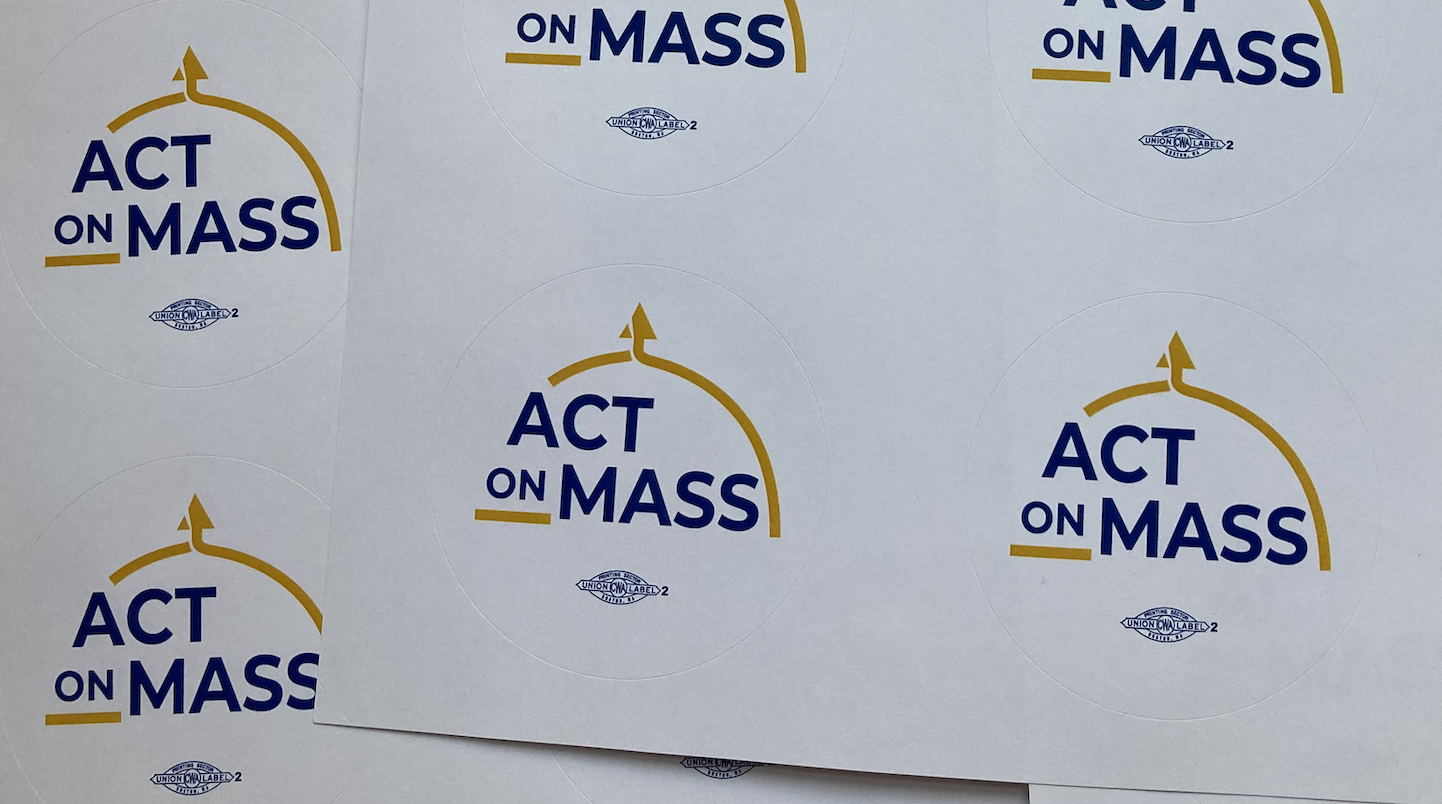 Start a recurring donation, get an Act on Mass sticker!

While we love all our donors, there is a special place in our hearts for our recurring donors. As a way of saying thank you to those who give monthly, we’re sending all our sustaining members our very first piece of Act on Mass merch! Snag your sticker by starting a recurring donation of any amount today:

It’s not hard to see at a glance that the Massachusetts State Legislature is disproportionately white, but how white is it? 87% of members of the legislature are white -- a far higher percentage than the population of Massachusetts (71%). And it only gets worse the higher up in leadership you look; only one of the twenty-nine leadership positions in the House and Senate is held by a person of color, or roughly 3%.

Last for real this time, a fun fact to actually kick off your weekend

Forgive the Boston-centric news from this statewide org, but I couldn’t help myself: the long-awaited and repeatedly delayed Union Square, Somerville T stop is officially opening March 21st! This will be the first train stop added to the MBTA’s rapid transit map since 1987. This project in particular, referred to as the Green Line Extension (or “GLX” if you’re hip with the kids) has been discussed since 1990 – four years before the Somerville resident writing this email was born.

That's it for this week! Happy snow shoveling, and stay safe out there.