Massachusetts is one of 9 states around the country that has chosen to prioritize the nearly 22,000 incarcerated people statewide to receive the vaccine. As a large percentage of reported cases have been behind bars, this news is a welcome development. Correctional facilities have seen a disproportionate number of serious cases and deaths in relation to the wider population, and vaccinated incarcerated people would go a long way towards stopping the spread.

But this step isn’t enough, considering the rapid spread of COVID in correctional facilities due to the inability to social distance, horrific sanitary conditions, and a lack of available medical care. According to the New York Times, 20% of the incarcerated population nationwide has been infected by COVID-19 and a staggering 1 in 10 incarcerated people is over age 55, meaning they are more vulnerable to infection and serious illness. Incarcerated people are also more likely to have co-morbidities and chronic medical conditions that increase the likelihood of illness and death. In Massachusetts, Baker’s administration had known for months how incarcerated individuals have been particularly vulnerable to the virus, and they did not take action. Correctional facilities are required to report cases weekly, and it’s clear there has been a horrific spike in cases that could’ve been avoided.

Groups like Families for Justice as Healing, Black and Pink Massachusetts, and Prisoners’ Legal Services have been sounding the alarm for months on how deadly the virus has been for incarcerated populations, but the administration’s response has been minimal - and the Legislature has repeatedly refused to take action despite knowing the facts.

As early as March 30th, Rep. Lindsay Sabadosa filed a bill (H.4652) to enact emergency decarceration rules that could have saved lives. The bill included immediate release for all individuals charged with nonviolent crimes, releasing all nonviolent offenders in pre-trial detention, expanding parole, and releasing individuals over fifty years of age and those who have chronic medical conditions. That bill has since been left to die in committee, despite ever increasing case numbers and almost zero ICU capacity throughout the state. In fact, according to a recent report by ACLU Massachusetts, pre-trial detention numbers have actually increased over the course of the pandemic. 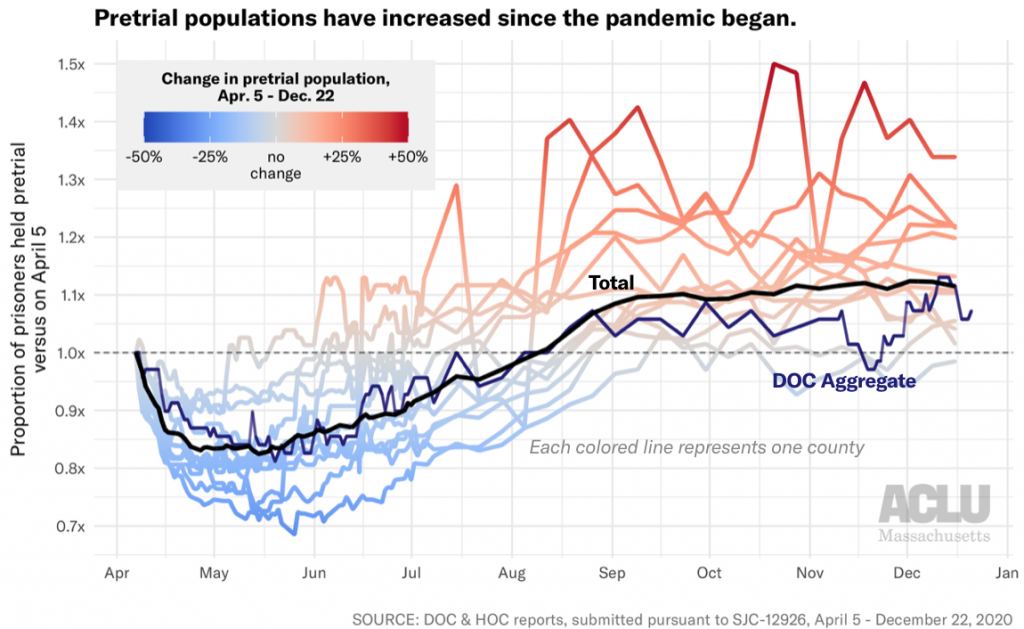 In the last fiscal year budget, the Legislature passed an increase for the Department of Corrections budget with little controversy, despite their criminal mismanagement of the pandemic. Instead of taking concrete steps to mitigate the effects of the pandemic like ending pretrial detention or releasing , they’ve spent their time covering up the deaths of prisoners and artificially trying to lower the amount of deaths they are responsible for. Last month, two men in critical condition who were granted medical parole died less than a day after they were released, but the granting of parole meant that they were formally no longer in the DOC’s custody. Therefore, neither death was counted in the state’s report of COVID-19 deaths in correctional facilities, and neither death had to be reported to the state examiner.

In the absence of leadership from the state, we are leaving the over 22,000 people in correctional facilities at extreme risk of contracting COVID-19 with little to no adequate medical care, social distancing, or PPE. The particular medical trends among incarcerated populations make their increased exposure tantamount to a death sentence. Decarceration in this moment is a necessary public health measure and a moral imperative.

The Legislature has repeatedly stated their commitment to protecting Massachusetts residents and blunting the impact of the pandemic. An administration that is truly committed to stopping the spread and saving lives has no other option than to decarcerate.